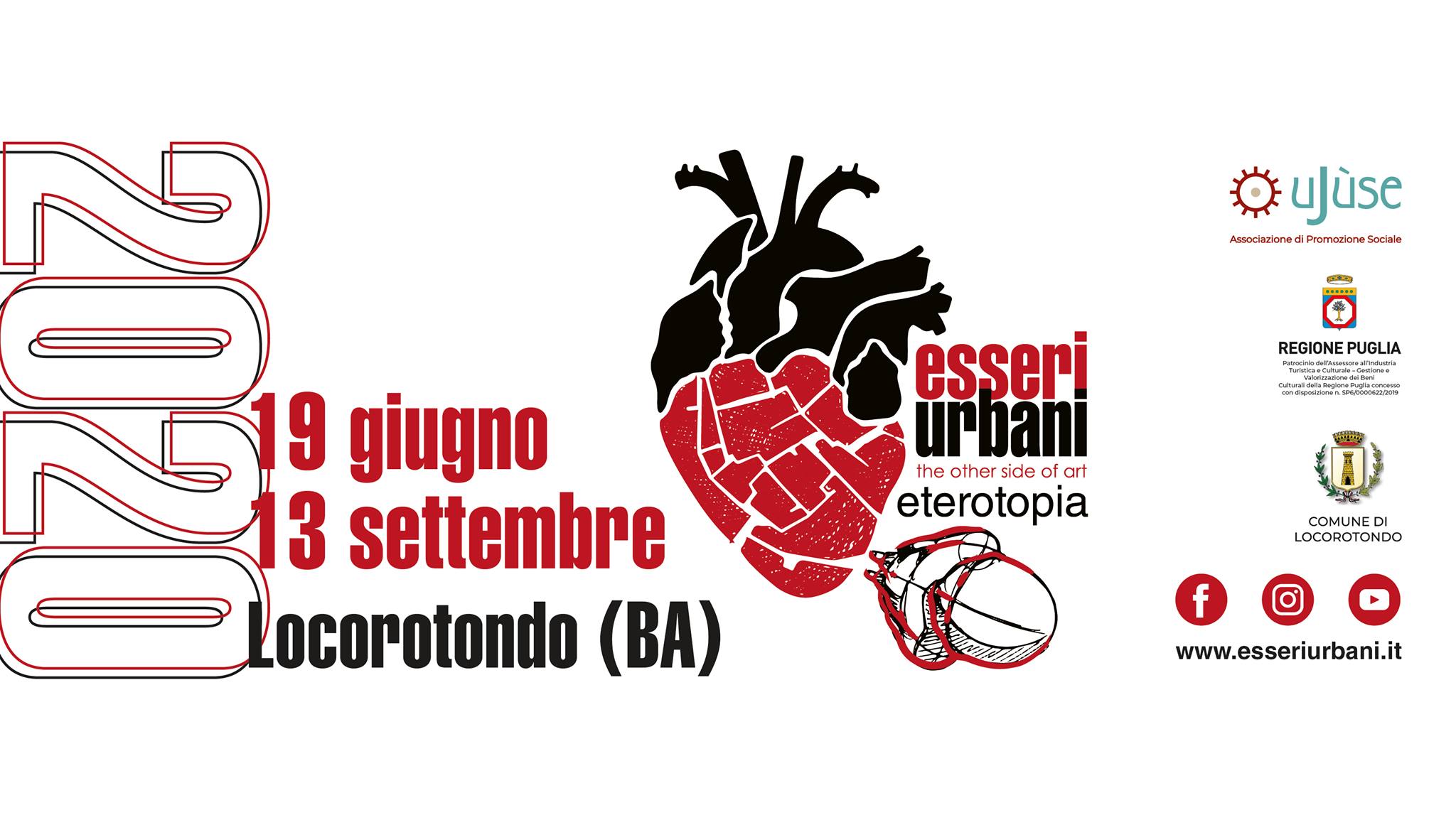 An international call online for artists, designers and architects and selection of the ten art projects to feature in the 2nd edition of the Festival.
Participation in the #OPPOCITIES Social Photo Project.

U Jùse ASP (Social Promotion Association) announces the 2nd edition of ESSERI URBANI the other side of art.
Ten site-specific art projects are to be selected, for showing in an open-air exhibition to be held in the streets of the historic centre of Locorotondo from 19 June to 13 September 2020: the ESSERI URBANI Contemporary Art Festival − Heterotopia.

The topic of this 2nd edition of Urban Beings is “Heterotopia”. Candidates should design their art projects on the suggestive 1960s concept of the French philosopher Michel Foucault. He thus determined localized utopias, “other-places” that are as if “hanging” outside a place while remaining real and accessible; a type of “other-spaces” that every society and culture produces such as, for us, a mirror, the cinema, a ship.

The starting-point remains the concrete space – views and streets that we know and see every day – but interpreted anew, from a fresh perspective, temporarily modifying its traditional functions and identity. Such direct interaction between works and the space they occupy will undoubtedly amplify the involvement of observers, enabling them to establish, in turn, a more “intimate” contact with the works. The places themselves will become works of art and will offer the possibly unique opportunity of being experienced in quite extraordinary ways; moving, pausing and/or functioning within them, creating moments for socializing and spontaneous sharing of experiences.

Art, outside gallery walls, spilling over into public spaces and opening up to a more emotional and participatory use, already plays a significant role in the processes of urban regeneration and requalification as well as in the planning of the territory.  The language of art – an instrument of great poetical power – thus infiltrates the typical architectural features of Locorotondo for visitors to identify with the until then unimaginable “other-places” which, by evoking an unreal elsewhere, give new value and meaning to the existing place. The imaginary manipulation of urban spaces and the possibility of interacting with them, provoking somewhat the traditional vision of reality, aims to stimulate a collective consideration of topics related to the image of the town as a human creation.
A proposal for a collateral activity – workshop, talk or other – by the candidate could also be included, to take place during the Festival. This activity will be acknowledged.

The general aim of the initiative is to explore the possibilities of interaction between artistic language and urban fabric, by creating an original and temporary itinerary crossing alleys, clearings and squares – in effect an open-air museum. No longer will people seek art in galleries, but art will be brought to the street, to places where people live.

Higher marks will be given to projects that focus on the inclusivity of the work, since this festival has made accessibility one of its main features.

Applications should be sent via e-mail to info@esseriurbani.it with “PARTECIPAZIONE ESSERI URBANI − SECONDA EDIZIONE” as the subject, not later than 12.00 pm on 5 April 2020.

Results of the selection will be made known  from 12 April 2020 on the www.esseriurbani.it web site.

Rules for participation in the #OPPOCITIES Social Photo Project have also already been published. It is possible to participate up to 30 April 2020.

In the spaces we see and pass through every day, it is the anomalies that often attract our attention; a jarring note that, altering our usual perception of the surroundings, strikes us by its very irregularity, its very “exceptional” presence.

Their appearance, function and unpredictable randomness mean that these other-places are opposed to the reality around them but, at the same time, contribute to characterising and identifying it. They become reference points along our route.

#OPPOCITIES traces a map of urban reality where strangeness, nonsense and discord emerge as a distinct non-uniform element, out of time and space. What takes shape is a new image, portraying the landscape, environment and architecture of the world through perception of its anomalies, gathered together in a kind of huge illustrated atlas.

It is very easy to take part in the contest:

Thirty photos (30) will be selected and printed from among those sent. They will be exhibited during the Festival. The authors of the 30 shots selected will be entitled to free entry – personal and non-transferable – to any paid exhibitions.